Dad and I went to lunch twice this week, but they were both repeats.  BUT!  Grandma was up visiting and we wanted to show her some cool places that were sure bets.  Plus we went there before I was writing these little reviews so we needed another try, right?

Our first pick of the week was Tuesday was mine and we went to Harvey’s at Union Station.

When you go, ask to sit upstairs.  Since its in the “lobby” of Union Station, you get a great view of Union Station from up there!  Its a beautifully restored old building and I’m glad its part of our wonderful city.

When we sat down and was perusing the menu my eyes were drawn to the onion rings and I decided those needed to happen first.  I didn’t get a picture of them before they were devoured.  It was a generous helping of perfectly breaded and cooked onion rings with generous sides of ranch (my fave) and ketchup.  I think we all give the appetizer alone a solid 5!

There were lots of yummy things to choose from on the menu and I was struggling with making a decision.

The top picture is my meal.  It was Panko crusted chicken with ham and cheese over mashed potatoes and served with green beans.  The chicken was great but the ham and cheese on it made it too salty so I pushed that aside.  It was a good change of pace.

The middle is Grandmas meal  She went for the baked potato soup and a house salad.  She said the soup was a bit too salty and the salad was not cut up enough (what is up with that when you order salads at restaurants these days?!?).

Dads meal was the bottom picture.  He opted for a French Dip sandwich with a side of fruit.  He’s not even a horseradish fan but said the sauce was decent. 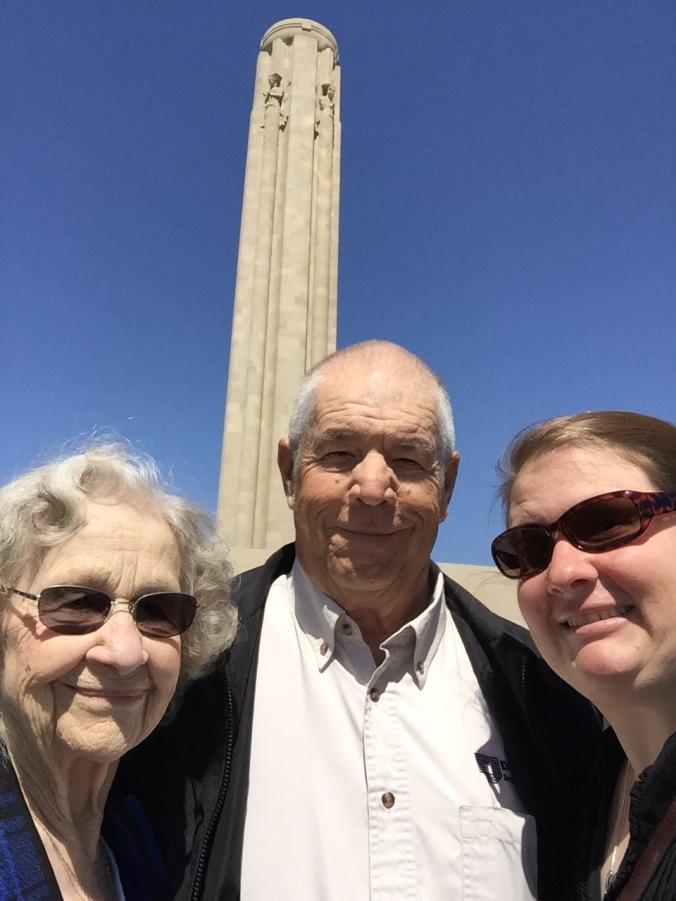 After lunch we went across to the World War 1 museum at Liberty Memorial.  Another great place to visit!