This past week we switched up our lunch day due to both of our schedules and went for a Monday lunch instead of our usual Thursday lunch.  Dad met me at work and we went to a local place to my work that I had never tried, Luna Azteca, at  I29 and 64th Street in the Burlington Creek shopping center.

You get chips and salsa when you sit down.  The chips were good and the salsa, while it had cilantro in it, it wasn’t overwhelming and was actually pretty good to this cilantro hating girl.  We also started off with Azteca (cheese) dip because its Mexican food and why not?  We only got a half order of cheese dip and it was still a generous portion. 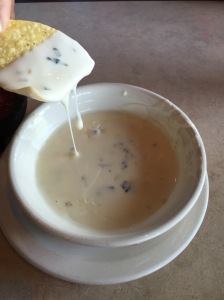 For our meals, Dad chose the Pollo Asado with cheese on top and I went for the Royal Burrito with chicken, beef, lettuce, cheese and sour cream in it (you could customize it). 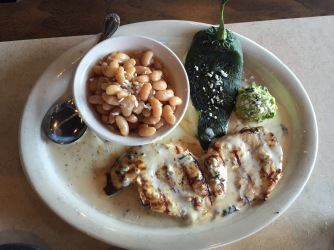 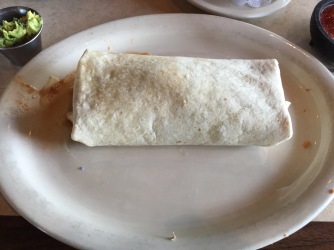 As far as meals go, it was a good meal but pretty common as far as Mexican restaurants go.  Dad had never had a poblano chile and wasn’t fond of it but live and learn!  My plate was very visually boring but the burrito was chocked full of yummy stuff and very good.  I couldn’t even finish it all!

I would go back and may even try some carry out some time for something different to have at lunchtime at work.  I hear they have a good Taco Tuesday special.  May have to check that out sometime too.

Last weeks adventure was Dads pick and we went to The Farmhouse in the City Market area.  It is on the corner at 3rd and Delaware, just a few blocks away from City Market.

It’s in cool old building (which we both love to look at the details in these old buildings) but we opted to sit outside on the patio because it was such a beautiful day!  We had a nice and shady spot on the patio and  a great view of the street car as it passed by. 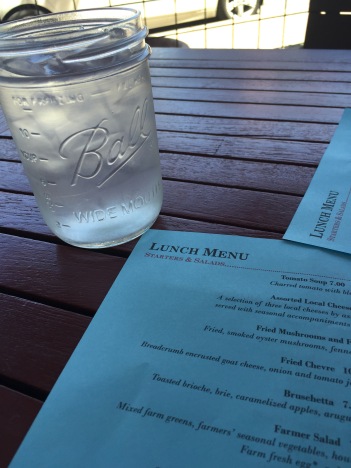 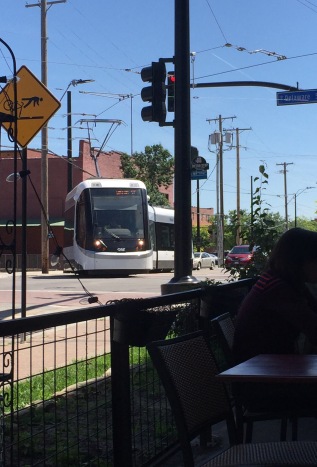 They have a great menu with plenty of choices, but not too many.  Sometimes places overwhelm you with choices (I’m looking at you, Cheesecake Factory!) and it makes it so hard to decide what to get!

As we are to do lately, we started with an appetizer.  We went with the Bruschetta.  Instead of being what I normally think of when I think of Bruschetta, it was a great twist.  It was brie cheese, caramelized apples, arugula and a red wine sorghum reduction on toasted brioche bread.  It was DELICIOUS. 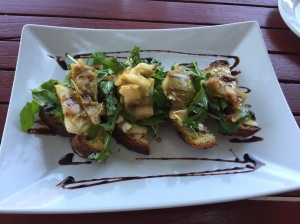 For our meals I chose the Turkey Club.  Along with the regular items a club normally has on it, it had bacon cream cheese and a fried egg, both interesting and great additions.  It also featured more of the dark turkey meat than you normally see on a club.  It came with fries also.

Dad went with something completely different and that he had never even heard of.  He chose the Crispy Pork Confit sandwich.  It too came with fries. 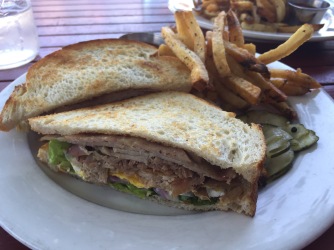 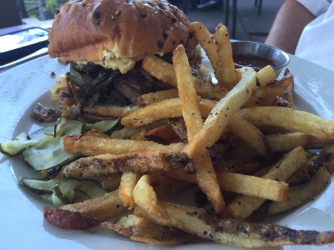 Both meals were pretty darn tasty.  The fries were GREAT.  They were served with a side of house made ketchup that was a bit spicy but good.  My sandwich was pretty good although the darker meat was a little overwhelming for me as i’m not usually a huge fan of it.  There were also home made pickles on the side which were a nice treat.  Dads sandwich was tasty too.  It was an interesting mixture of flavors.  The roasted garlic mustard was a bit overwhelming after eating part of the sandwich.  We ended up trading second halves of our sandwiches (as we do sometimes to get to try a bit of each others) although I was full by the time I got to the second half of his.

Overall it was a great meal with decent service and I know we would both go back to try more menu items.

A couple weeks ago we went to Meatball District!  It is located down on 39th Street close to KU Med.  Maybe its the Voelker neighborhood?  If not, its super close to there.  I have driven thru that area many times but never realized there were so many places to eat down there!  I had heard about Meatball District randomly somewhere and it piqued my interest and I knew we needed to try it.

It’s a cozy little place with quite a bit of seating.  We chose a seat at the high top table in the window so we could spy on the neighborhood.  We have been into appetizers lately and decided to start off with the Fried Mac and Cheese Bites.  They did not disappoint, either.  Mac and cheese goodness fried up and served with a ranch dipping sauce.

For our meals, we both chose different preparations of our balls.  Dad went with the spaghetti.  When you order the spaghetti, you get to choose your meat for the meatballs, the sauce and the noodles.  He went with 2 beef and 2 pork meatballs, the classic tomato sauce and the seasonal vegetable noodle which was made from zucchini.  I went with the Baguette.  I chose 2 chicken and 2 beef meatballs and went with 1/2 classic tomato sauce an 1/2 Parmesan sauce (I was feeling very conflicted on what I wanted).  Mine also came with french fries and a drink. 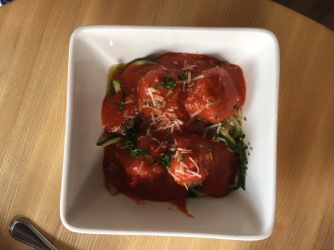 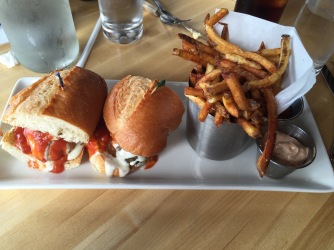 It was a very tasty meal!  The meatballs were a bit spicier than we expected but they all had very good flavor.  The sauces were also very good.  Dad was out of his comfort zone with the zucchini noodles but ended up liking them when he got them.  The lunch special I got was a very good deal especially since it included a soft drink.  We would both go again to try some more items!  My only regret is that we didn’t try the home made Ice Cream Sandwiches!

Early in May Kansas City christened its new streetcar line.  We have been super excited to see this come to life and it finally did!  We started our adventure by getting on at City Market and riding it all the way around the line.  We did learn that you need to press the button for a stop, especially if no one is waiting at the stop.  The streetcar keeps going otherwise!

With the streetcar line in mind Dad picked his restaurant for the week, The Homesteader Cafe. 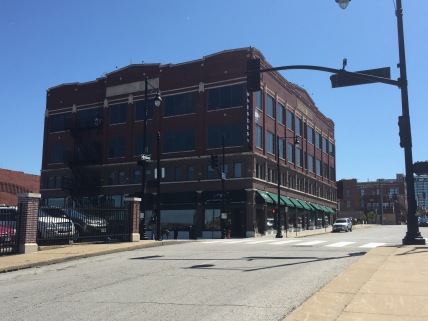 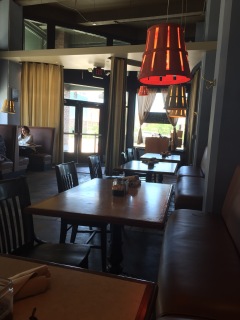 The Homesteader Cafe sits a block off the streetcar line so it was an easy walk to get there from the stop.  It’s a quaint place with friendly service.

They have an interesting menu of food made from local farmers.  There were lots of yummy sounding items to choose from.

Our first choice was the Baked Brie appetizer.  It was a sizable portion of brie cheese wrapped in a phyllo type dough with red wine jelly on top.  It was also served with a side of toasts.  I had tried brie before but it was dad’s first time.  We both really enjoyed it and ate the whole thing! 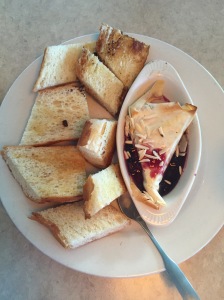 The “specials” sign was intriguing to both of us and dad decided to try one of the soups, the Beer Cheese. 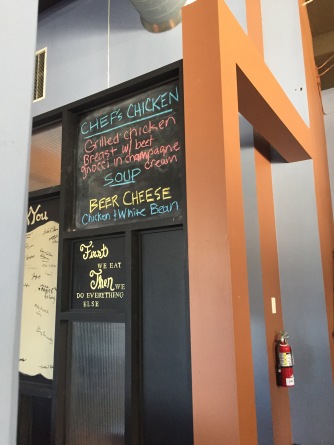 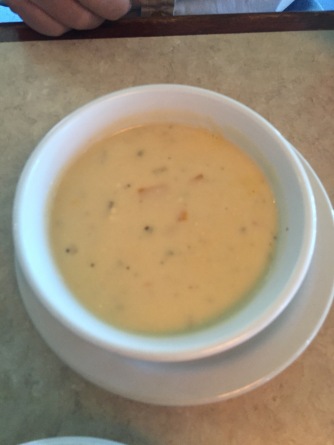 Dad also ordered his entree off the specials sign, the “Chef’s Chicken” which was a grilled chicken dish with beet gnocchi in a champagne cream sauce.  I ordered the Mac and Cheese BLT that I had eyed on the menu. 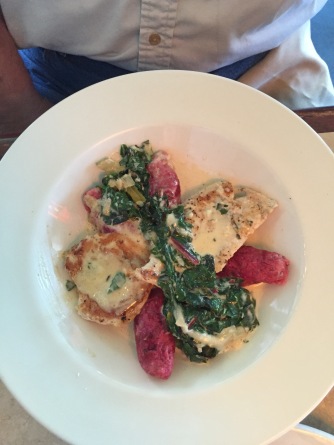 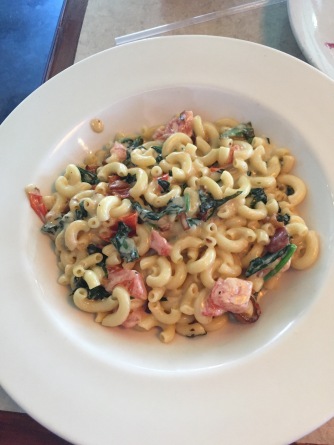 Our food came quickly and we dug right in.  Both dishes had great flavors and were interesting mixes of food.  Dad’s beet gnocchi was a little too…beet-y tasting but what can you do? I ended up taking home part of my mac and cheese and it was good the next day too.

The service was excellent and our server was very knowledgeable, friendly and efficient. 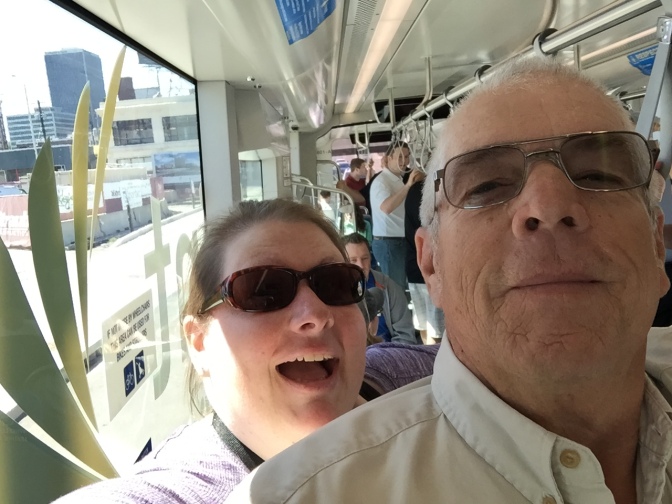